During the holidays, while my wife grabbed her non-alcoholic sparkling grape juice, I took two soju off the shelf.

Last year, I also bought this as a last-minute decision. I was originally planning to try new flavors this time, but there were limited choices available at the store. There was the original unflavored one, green grape and grape fruit.

I am not a connoisseur of this drink, nor am I a strong drinker. I do like to have a taste every once in a while.

For some time, I have been curious about the taste of the Korean alcoholic beverage of soju. I blame the tons of K-Dramas that feature them. The most I know is that it has high alcohol content.

END_OF_DOCUMENT_TOKEN_TO_BE_REPLACED

However, the episode number on MyAnimeList (MAL) and the episode on Netflix made me wonder… why are they different? On MAL, it was listed as a twelve-episode series, but on Netflix, it was only three. END_OF_DOCUMENT_TOKEN_TO_BE_REPLACED

I don’t usually do episodic anime reactions and reviews – so this will probably be an on and off thing.

Anyway, I decided to watch the reboot of Fruits Basket today, and episode 1 was as amusing as I remember it. I guess what they say about the reboot and the old anime version being true to the source material up to a certain point must be true. There are some changes that I am expecting – specially how they handled Shigure. However, for now, I still find him as amusing as ever. END_OF_DOCUMENT_TOKEN_TO_BE_REPLACED

For the past few weeks I had been watching BoJack Horseman on Netflix, to the point that my wife got sick of seeing me watching “that ugly horse cartoon again” over and over again. Hahaha…

I have to admit – the show got me hooked. I could not help but relate to the things the characters were going through – the depression, the anxiety, the addiction, the entire mess of their lives.

If you haven’t watched the series finale yet, mild (really mild) spoilers ahead. You have been warned. 🙂

END_OF_DOCUMENT_TOKEN_TO_BE_REPLACED

I am no stranger when it comes to the story of Jojo’s Bizarre Adventures. I have been reading the manga, at least up to some chapters in Steel Ball Run, the 7th part of the manga.

This month, however, I decided to partake in the anime. It has been years since I read it, and there are a lot of details lost to me. Which means that it is perfect for me to watch because there are parts of the story that will still be suspenseful and thrilling, and that I would not be generally spoiled in the experience. END_OF_DOCUMENT_TOKEN_TO_BE_REPLACED

I am in the second season of Seven Deadly Sins, and I find that its universe is both interesting and find it a fun anime to watch.

The main character – Meliodas is an overpowered, and perverted character with always a smile on  his face. It’s hard to picture him as the one bearing the sin of wrath. I do admit that most of his antics make me slap my forehead a couple of times, but it does make me chuckle a bit.

Probably one scene that never fails to give me a good laugh is his interaction with Ban. Ban is an immortal. Meliodas has overwhelming strength. When these two meet it always causes chaos and destruction.

Thinking about it, a full powered high-five from Meliodas might make an ordinary human explode to pulps.

So why Seven Deadly Sins? They are an elite group of knights with incredible abilities, however it would seem that each of them has a past that reflects their titled sins. Each of them has an animal symbol and sin associated with them. Meliodas is the dragon sin of wrath. Ban, is the fox sin of greed. How they got their sin title is revealed in the series. I am a bit wondering about how they got their animal symbols, but I do have a bit of an idea.

The world the story is set is also interesting – a world set in a time where the human and nonhuman worlds were forever divided. Therefore, this fantasy world has most of your basic fantasy elements of knights, wizards, giants, magicians, demons and gods.

The entire series is not all fun and games, however, and it would seem that the first season of the anime is simply a taste of what is yet to come.

As an added bonus, one of their Opening Credits is done by Man with A Mission, and it is entitled “Seven Deadly Sins.”

In any case, I find it amusing, and would continue on to watch Season 2, and also take a look at some of the spin-offs that are available.

Giants eating humans… Giants around 15 meters tall, at the average… Giants that somehow can move fast enough that almost always guarantees death if you encounter them, unless you have special equipment to make you move faster – like a horse… Giants that can regenerate lost limbs and other various body parts… Giants that eat humans for pleasure… 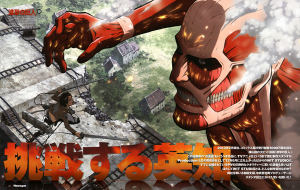 This is the world that “Attack on Titan” (Shingeki no Kyojin) is set on. Titans have suddenly appeared and have started to devour humans. Mankind seemed to have no hope against these creatures and almost became extinct.  They sought refuge behind a 50-meter-high wall. This wall has been man’s protection against the titans for 100 years.

Then one day, a colossal titan, whose head managed to be seen from above the walls, kicked a hole in the gates which caused a breach, and reminded humans why they were walled-up in the first place.

Hope was not completely lost, though.  Titans have a weakness. Slicing the back of their necks kills titans. This required the invention of a maneuvering gear that enabled humans to leap up to the tall titans and cutting off that weak point.

It was mostly a one-sided battle, with humans being slaughtered.

Hope is a commodity rarely given and is mostly crushed to near in-existence. Death is cheap. The show is cruel, and gory.

Part of the series’ appeal is the mystery of the Titans. Who or what they are, how they came into existence is a mystery yet to be solved and understood. The characters are interesting, as well, though I am more interested with understanding the origins of Titans and how the humans will overcome this adversity.

It is an interesting series worth looking into.

Now, if the setting of the show is not enough to reel you in, here’s the awesome opening song of the anime series.

Nothing like a good vampire anime to get the blood flowing! (pun intended)

It’s bloody, a lot of action and has interesting characters. Well, at least that’s what I saw from the first two episodes that I watched.

END_OF_DOCUMENT_TOKEN_TO_BE_REPLACED 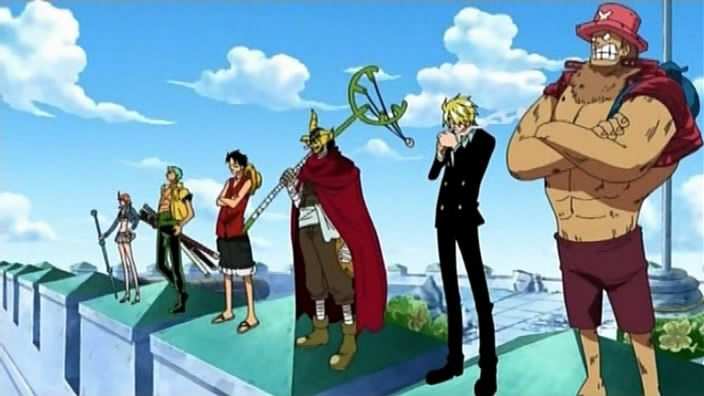 I haven’t watched One Piece in a while.  So, I guess I should start with my impressions of this episode.

Robin didn’t like the idea of the crew going out of their way to save her.  END_OF_DOCUMENT_TOKEN_TO_BE_REPLACED