However, the episode number on MyAnimeList (MAL) and the episode on Netflix made me wonder… why are they different? On MAL, it was listed as a twelve-episode series, but on Netflix, it was only three. END_OF_DOCUMENT_TOKEN_TO_BE_REPLACED

I don’t usually do episodic anime reactions and reviews – so this will probably be an on and off thing. 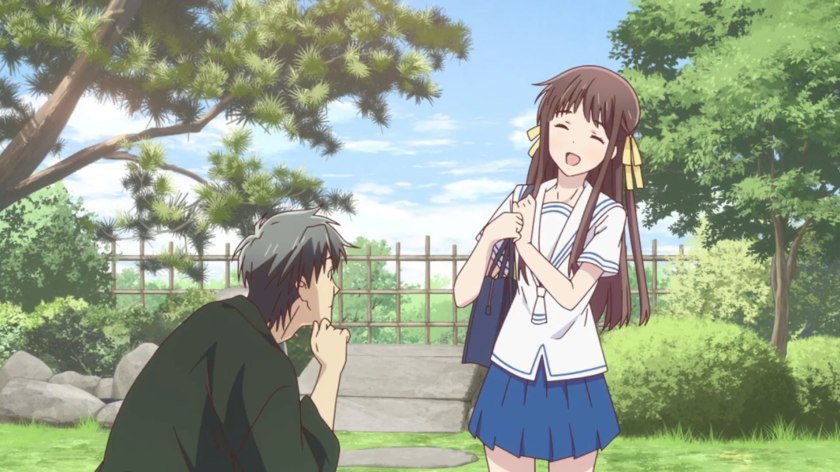 Anyway, I decided to watch the reboot of Fruits Basket today, and episode 1 was as amusing as I remember it. I guess what they say about the reboot and the old anime version being true to the source material up to a certain point must be true. There are some changes that I am expecting – specially how they handled Shigure. However, for now, I still find him as amusing as ever. END_OF_DOCUMENT_TOKEN_TO_BE_REPLACED 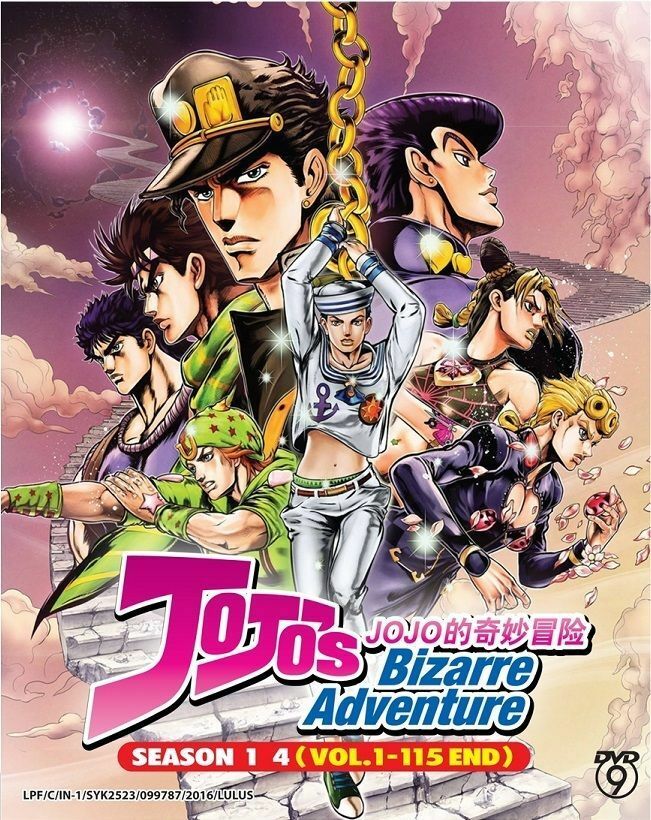 I am no stranger when it comes to the story of Jojo’s Bizarre Adventures. I have been reading the manga, at least up to some chapters in Steel Ball Run, the 7th part of the manga.

This month, however, I decided to partake in the anime. It has been years since I read it, and there are a lot of details lost to me. Which means that it is perfect for me to watch because there are parts of the story that will still be suspenseful and thrilling, and that I would not be generally spoiled in the experience. END_OF_DOCUMENT_TOKEN_TO_BE_REPLACED

Hello! I’m glad that you could drop by.

I haven’t been able to post anything this week, mainly because I have been very busy, and nothing notable to post has surfaced from my head for the past few days. Well, there might be some, but the inner editor in me often objects.

Fortunate for me, as of the moment, blogging seems to be a productive output for my procrastination today. Heh.

I find that forming an article from thin air can be difficult to do when exhausted. Most often I’d rather sit in a corner doing nothing after a very long day. Then, there are times when I’m too exhausted that I’d fall asleep where I sat down.

END_OF_DOCUMENT_TOKEN_TO_BE_REPLACED

I am a One Piece Fan, yet I haven’t watched an anime episode in a while (I have been up to date in the manga, though)… So, I decided to pick it back up again from where I left off…

After being three episodes in, I got bored and could no longer continue, and here’s why:

Well, I do understand that it is a weekly anime, and was never really built for binge-watching. However, I do tend to binge watch mainly because waiting too long would mean that I might forget what happened in the previous episode (hence I understand the need for the recap done at the start of every episode).

Anyway, I’d just have to soldier on if I do want to catch up with the anime. The forward button is going to be a good friend in these trying times.

As a side note, I am still stuck in the Thriller Bark Saga.

I am in the second season of Seven Deadly Sins, and I find that its universe is both interesting and find it a fun anime to watch.

The main character – Meliodas is an overpowered, and perverted character with always a smile on  his face. It’s hard to picture him as the one bearing the sin of wrath. I do admit that most of his antics make me slap my forehead a couple of times, but it does make me chuckle a bit.

Probably one scene that never fails to give me a good laugh is his interaction with Ban. Ban is an immortal. Meliodas has overwhelming strength. When these two meet it always causes chaos and destruction.

Thinking about it, a full powered high-five from Meliodas might make an ordinary human explode to pulps.

So why Seven Deadly Sins? They are an elite group of knights with incredible abilities, however it would seem that each of them has a past that reflects their titled sins. Each of them has an animal symbol and sin associated with them. Meliodas is the dragon sin of wrath. Ban, is the fox sin of greed. How they got their sin title is revealed in the series. I am a bit wondering about how they got their animal symbols, but I do have a bit of an idea.

The world the story is set is also interesting – a world set in a time where the human and nonhuman worlds were forever divided. Therefore, this fantasy world has most of your basic fantasy elements of knights, wizards, giants, magicians, demons and gods.

The entire series is not all fun and games, however, and it would seem that the first season of the anime is simply a taste of what is yet to come.

As an added bonus, one of their Opening Credits is done by Man with A Mission, and it is entitled “Seven Deadly Sins.”

In any case, I find it amusing, and would continue on to watch Season 2, and also take a look at some of the spin-offs that are available.

Giants eating humans… Giants around 15 meters tall, at the average… Giants that somehow can move fast enough that almost always guarantees death if you encounter them, unless you have special equipment to make you move faster – like a horse… Giants that can regenerate lost limbs and other various body parts… Giants that eat humans for pleasure…

This is the world that “Attack on Titan” (Shingeki no Kyojin) is set on. Titans have suddenly appeared and have started to devour humans. Mankind seemed to have no hope against these creatures and almost became extinct.  They sought refuge behind a 50-meter-high wall. This wall has been man’s protection against the titans for 100 years.

Then one day, a colossal titan, whose head managed to be seen from above the walls, kicked a hole in the gates which caused a breach, and reminded humans why they were walled-up in the first place.

Hope was not completely lost, though.  Titans have a weakness. Slicing the back of their necks kills titans. This required the invention of a maneuvering gear that enabled humans to leap up to the tall titans and cutting off that weak point.

It was mostly a one-sided battle, with humans being slaughtered.

Hope is a commodity rarely given and is mostly crushed to near in-existence. Death is cheap. The show is cruel, and gory.

Part of the series’ appeal is the mystery of the Titans. Who or what they are, how they came into existence is a mystery yet to be solved and understood. The characters are interesting, as well, though I am more interested with understanding the origins of Titans and how the humans will overcome this adversity.

It is an interesting series worth looking into.

Now, if the setting of the show is not enough to reel you in, here’s the awesome opening song of the anime series. 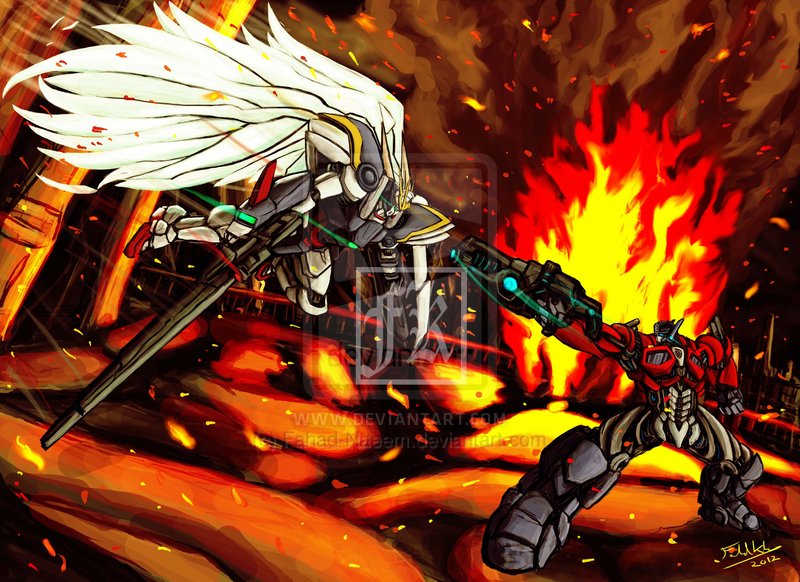 A lot of people mistake Gundams for Transformers.

I don’t blame them, there are a lot of similarities between the two, but the difference is also huge.

Artificial Intelligence.  Transformers are sentient beings.  They are another alien race of their own, with mechanical bodies and they came from a different planet.  Gundams are mobile suits.  Well, that term does not really help much, but by the term “suit” – it means that people “wear” them, right? But in the case of Gundams – people pilot them.  My vague memory of the Transformers series tell me that while people can ride the Transformers in vehicle mode, in robot mode, no human are within the robot itself.

More than meets the eye. Who doesn’t remember the theme song of the Transformers series? The Transformers, as the name so subtly suggest, are robots that can transform into something else. The Autobots transform to more civil-themed vehicles, while the Decepticons are more war-like. Now, here is where some people get confused, because some Gundams do transform.  The original Gundam had the mobile suit transform from a fighter plane (Core Fighter) as various parts of the mecha are sent to it. There are some Gundam models, such as Kyrios from Gundam 00 which has the ability to transform to a fighter plane. To the uninitiated to the Gundam franchise, I wouldn’t be surprised if they view this as a “transformer” ability and mistake the robot as another series.

Made in Japan.  The original Transformers animation, though it is owned by an American Company, was animated in Japan.  I made the mistake to think of it as a “Japanese Anime” because of the animation style.  It was only a few years ago that I found out that the Transformers franchise is actually American, but was actually animated in Japan. Gundam is 100% made in Japan. Well, at least that is what I know. Unless they ship off some of  the animation to some sweatshop that colors or performs some minor animation outsourcing (which I highly doubt).

I know that there are a lot of similarities and differences between these two animation franchise, but from my perspective, these are the things that I find most notable.  What about you? Do you have anything to add?

Thank you for reading, and have a nice day. If you want to support me, here are some ways:

Eyeshield 21, an amateur at American Football, yet a person with a great talent in speed suffered his first tackle.  It was a rather painful one.  It most likely damaged not only his physical body, but also caused some emotional scars.

We have a natural avoidance for pain. (Unless you’re a masochist who prefers to receive pain…) Such is observed when we accidentally touch a hot object and we react with reflex by pulling it away. Once pain is experienced, we would rather not have to go through it again.

I can imagine the fear of possibly going through another painful experience. And that could affect us mentally, which would then affect us physically.  We tend to be more careful, and try to take lesser risks that could result to the pain.

How would Sena react to this turn of events? He’d rise to the challenge, of course!

We fail, we fall, but we must stand up and rise again.  What does not kill us makes us stronger.  Once we overcome that fear of experiencing pain again, we become braver.

I find it timely that I try blogging here again with this episode.  After my previous post, I felt that I should try again. Hey, no pain, no gain, right?

I’ve been reading Hellsing, and am now close to finishing the manga series. It’s a great story about vampires.

Well, anyway, that isn’t what this post is about.

I guess I’m not too keen on noticing authors, eh? I mean, just when I’m about to finish the series, I just noticed that the author of Hellsing is Hirano Kouta.