This post is in participation to Myth of the Mirror’s May Speculative Fiction. I hope you like this. 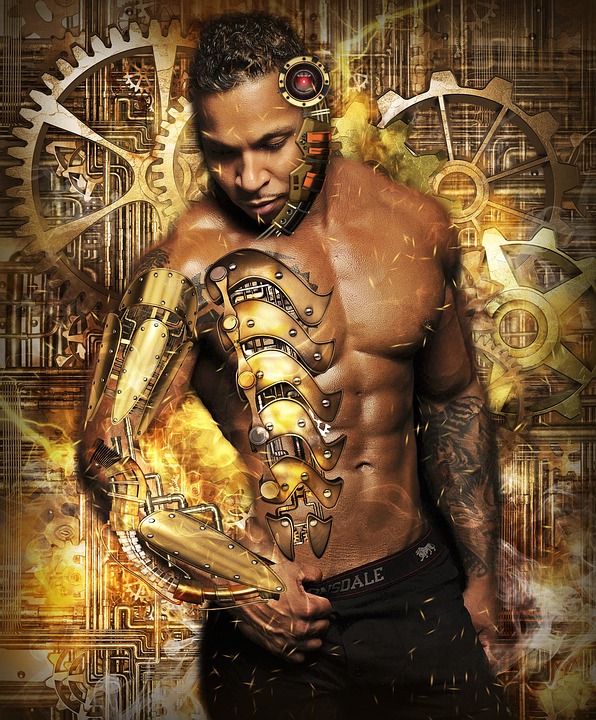 The last thing I remember was bright lights rushing toward me.

Then everything went blank.

There was no pain, no suffering. It must have been instantaneous. I did not even knew what hit me.

I was declared dead three hours after I was rushed to the hospital. They say I was a mess. I seemed more ground meat than human.

What saved me was a decision I made on a whim years ago. It was an act I barely put any thought into. I saw the choice, thought it was cool, and simply ticked the box with a check mark. I donated my body to science.

As soon as I was declared clinically dead, I was rushed to a laboratory who has been in the field of medical research connected with advanced prosthetics and robotics.

There, they did their work – replacing human flesh with artificial parts. I would love to say that they turned flesh to steel – but from what I can recall regarding the parts they placed, those were not really steel, but more of some kind of alloy.

In life, I was an ordinary college student in the field of engineering. Though I did not take my studies that seriously and was part party guy, and part student. When my consciousness was re-awoken… I did not know what I was anymore.

Everything was still black, but I could hear murmurs… voices…

“Connect that to the…” a man’s voice seemed to be instructing someone. A soft whirring sound started and a strong surge of electric current started buzzing.

“Normal on this side….” someone else said.

“Initiate the optic module.” I heard someone said.

The black was replaced by a blinding white light. I could not see that well, but I could see figures moving about around me.

They told me that my brain almost fried that day. Fortunate for me, the fail-safe worked.

The creature I saw in the mirror when I opened my eyes was clearly not human, however it retained my facial structure.

“We tried our best to reconstruct your face…” The man in the white medical robes said.  “We do want you to live as human as possible.”

I looked at my reflection. My eyes glowed red, my arms had tubes, wires, steel plates, nuts and bolts… clearly, this was no human.

It looked like me, but it was not me.

It was scary to think that the hands I saw in front of my face was not the same hands I was used to seeing for the twenty or so years that I can recall. It felt strange to have so many eyes look at me with wonder, amazement, and even fear.

“Can everyone please stop staring at me like I’m naked.”

“Actually, you are. Please put these on.” The doctor handed me a pair of shorts.

I looked down at my legs, and felt a bit embarrassed.

“So these are not metal shorts I’m wearing?” I said as I tried to smile. My body seemed to be capable of that, at the very least.

The doctor shook his head.

“Well that was embarrassing…” I guess cyborgs still need clothing.

“Welcome to your new life, Mr. John. You’re our property now. I hope we get along well.”

The doctor and his colleagues left me alone in the room, as they congratulated themselves.

I was left in the room staring at the mirror as I contemplated on the new life that I was given.

Three days have passed since I was reborn as a cyborg. My ability to tell the time has been more accurate than before, so I was certain that it indeed has been three days since my boot-up. One of the scientists working on me came in my room. He was bringing something large and heavy with him. I could see the strain on his face, though he did try his best to conceal it.

“What is this, Doctor Spark?” I asked him as he placed the equipment on my desk. It was large, black and sleek, with various vents, wires, tubes and cylinders.

“A new upgrade for you, my boy.” He beamed. Despite being one of the younger scientists in the Cybernetics project, he treated my like a young child. Perhaps in their eyes, I am their little baby. I shuddered mentally at the thought.

He attached the new equipment on my right arm. My internal systems recognized the equipment.

“Ion Canon Detected. Configuring…” my new mental voice, which sounded nothing like my own spoke. It was like an auto-tuned man’s voice.

“A canon? You built a canon for my arm?” I spoke in shock as I realized what the thing on my arm was.

” Yes, indeed. This new prototype would be able to demolish an entire block to cinders in an instant. Please be careful you don’t accidentally activate it.”

“Ion canon activating…” The mental voice said. The arm canon extended its barrels. A loud whirring sound could be heard as its mechanism began charging energy. Orbs within the canon, and my arm started to glow bright. Energy began gathering in my right arm.

“Deactivate it, John!” Doctor Sparks yelled amidst the loud noise and flashing lights.

“Ion canon deactivating…” the mental voice in my head said as the arm canon’s mechanisms started to die down.

Doctor Sparks started laughing aloud saying how that was a close call. “Voice activation can be tricky,” he said wiping the sweat off his brow.

“What are you guys working on?” I asked.

However, Doctor Sparks did not answer me. He quietly removed the canon from my arm as he gleefully declared the test as a success.

At first, I saw myself as a miracle. While I may have left my humanity behind, my mind was still definitely human.

In my previous life, I was generally a peaceful, fun-loving person. I liked adventure, and hanging out with my friends. Taking another person’s life has been far from my lists of things to do. While I do have experience in video games — those were fantasy, a world of make-believe. I felt a strange constricting feeling in my chest area, where my heart should have been.

I figured that my developers would not want to have a weapon with a conscience, so I kept most of my thoughts to myself.

The lead scientist in charge of me entered my room one day.

“Hello John.” He said with a soft voice.

“Hello Doctor Kusanagi.” The lead scientist was old, and wrinkled, yet his face calm and serene. He reminded me of a lake in a summer’s day. He was old, yet stood straight and proud. His stride seemed to hold some strength in them despite his age.

“What do you think of knives?”

Confused and taken by surprise by the question, I was not able to answer.

“What do you mean, doctor?”

“Knives. What do you think of them as?”

“It depends on the knife, I guess. There are knives that can be used to fight, and then there are the knives we use in the kitchen…”

“Indeed!” He exclaimed as he brandished a knife that he was holding with his right hand.

“This knife, can be as destructive to humans, as it can be as useful. Use it against another human, and it is a weapon. Use it for a different purpose, such as for cutting ingredients, then we have a useful tool.”

He handed me the knife.

I was not able to participate in a few writing prompts, and I am happy that I immediately got an idea as soon as I saw the image. I also saw that there was no April prompt, so I guess I was not that far behind! Hahaha….

I haven’t read any of the other submitted works, and I will probably start reading them after I submit this one.

Science fiction has been one of my favorite genre of fiction, yet I don’t really write sci-fi that much.

I haven’t written anything in the past few months. This writing exercise has been very helpful, and hopefully would get the momentum going for me to get back into writing more fiction (whatever the story may be).

I hope that the story was interesting, and that you liked it.

Once again, thank you for reading, and have a nice day.